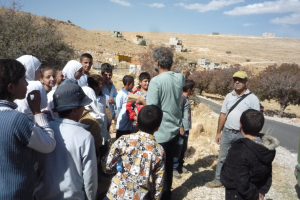 Aarsal is located in the Bekaa, 35 kilometers away from Caza center in Baalbeck. It is bordered by Al Ayn on the north, Al Labwah on the west and Syria on the east and south. Aarsal is 14 km away from the Syrian border and 122 km away from the capital Beirut. Its altitude is 1400-2000 m above sea level. Aarsal is divided into a vast eastern region (an arid area), the valleys which surround the town, and the mountainous region (Al Jurd). Some of the neighborhoods present are: Harat Shameili, Valley Aata, Bou Zeidan Square, Kamrak Square and many others.

There is an active municipality of 21 council members. The municipality is divided into three committees: Works, Health, and Environment committees. The town has 8 mayors. In addition, the Ministry of Social Affairs has developed a Guidance Association for health activities. Aarsal has been active in social development projects through several institutions such as “Rural Development”, “Aarsal Development”, “The Guidance Association”, “The Herders Cooperative”, “The Cooperative of Rural Preserves”, and “The Women’s Cooperative”. Aarsal has five public and seven private schools. The village has also 1 vocational training institute. University education is provided in Zahle 60 km away. Illiteracy rate is estimated at 4%. In Aarsal, electricity and telephone services are provided. However, no sewage disposal networks are found. Drinking and consumption waters are provided from artesian wells and stored in water tanks. Aarsal has groundwater and a river which flows seasonally. Aarasl inhabitants earn their income from different sources such as agriculture, trade, industries. The cultivation of wheat, chickpeas, and barley are used for local consumption. Fruits trees especially cherries, apricots, hawthorn, sumac and grapes in addition to some vegetables (eggplants, tomatoes, and cucumbers) are well spread in the village. All products are used locally with some vegetables marketed in Zahle. Raising livestock, such as cows, goats and sheep is common practice in Aarsal. The dairy and meat goods produced are used for local consumption within the Bekaa, and by the industries in Chtaura. The different types of industries found in Aarsal have markets all over Lebanon. Mainly there are stone quarries, cement factories, and handmade carpet industries. Illegal trades are common in the region where smuggling of electrical equipment, cigarettes, wood, metal, and textiles are a source of income for many villagers. Turpentine trees (Pistacia terebinthus), maple trees, coniferous trees (Juniperus excelsa), wild pear trees (Pyrus syriaca), and wild almond trees ( Amygdalus orientalis, A. communis) are widespread in Aarsal.


Recepies Used by This Community