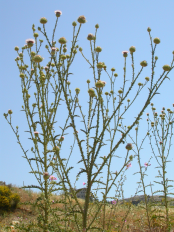 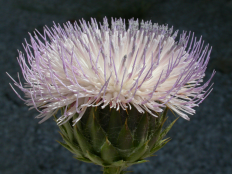 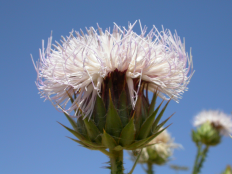 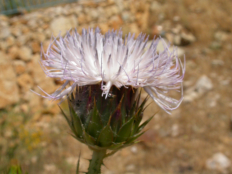 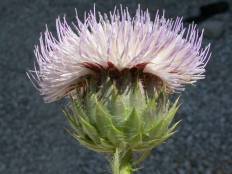 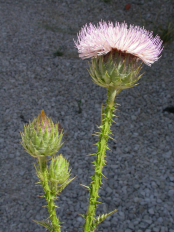 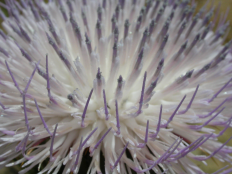 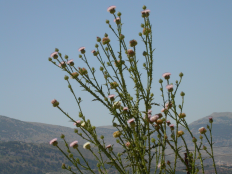 Onopordum is a genus of about 40 species of plants belonging to the Sunflower family, Asteraceae. Onopordum species are thistles that are distributed throughout the Mediterranean and semiarid areas of Eurasia and North Africa. The Latin name Onopordum derives from the Ancient Greek words onos (donkey) and porde (flatulence), because of the belief that the plant caused flatulence in donkeys. They grow on disturbed land, roadsides, arable land and pastures.

Onoprodum cynarocephalum, a species of Onopordum, grows wild in Lebanon. Commonly referred to as 'Artichoke Cotton-thistle', the Latin name of the species, cynarocephalum, has its origins in the Ancient Greek word kynara meaning 'spiny' and in the Latin words cinara, a kind of artichoke and cephalum meaning 'headed', describing the spiny or artichoke shaped flower of the thistle. The plant can reach from 0.5 to 3 meters, presents an alternate leaf pattern and purple flowers. Nutrient rich soils are preferred for optimal growth and the flowering period falls between May and July. This plant has been traditionally employed for its antibacterial, hemostatic, and hypotensive properties and for the treatment of skin cancer.

Doctor Muhtasib and co-workers researched Onopordum cynarocephalum's potential anti-colon cancer properties. They found out that, despite a significant decrease of the number of cancerous cells, the crude extract of the plant was too toxic for normal intestinal cells. Therefore, they stopped their research after their first publication. Dr. Muhtasib made herself clear: "Although I don't think that any anti-cancer drug will be formulated from Onopordum cynarocephalum because of its high level of toxicity to normal cells, this plant can still be the source of anti-inflammatory drugs which are required at significantly lower and non-toxic concentrations to exert a biological effect."