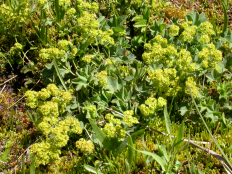 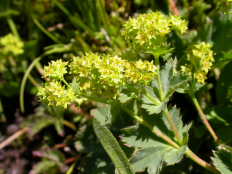 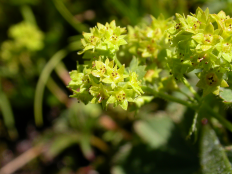 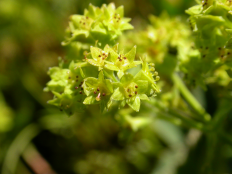 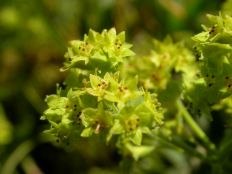 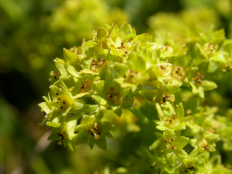 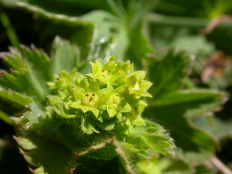 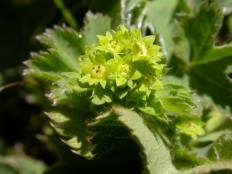 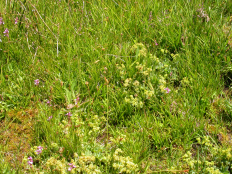 Alchemilla is a large genus of 300 species in the family Rosaceae. The majority are native to cool temperate and subarctic regions of Europe and Asia and a few species are native to the mountains of Africa and Americas. Most of its species share the trait of having hairs on its leaves, which catch the morning dew. This feature led to the origin of the family name, Alchemilla, which means 'little alchemist'. It refers to a particular practice from the Middle Ages of trying to turn base metals into gold, which required the purest dew, which alchemists would gather from the leaves of Alchemilla. The medieval herbalists also used this dew for treating wounds. Over the course of time, such a powerful and valuable plant became Christianized, hence its common name 'lady's mantle' in honor of Mary. It is said that this name was given in the 16th century due to the very shapely and pleated leaves of the plants that look like a lady's cloak, referring to the Virgin Mary.

Alchemilla diademata (Arabic common name:كمالية مكللة ) is a Lebanese endemic species of the genus Alchemilla. It is found in Mount Sannine, a mountain in the Mount Lebanon range located 40km northeast from Beirut. The stem of Alchemilla diademata is erect, hairy and 10-15cm in height. Its leaves are small, 3 to 4cm wide and 2 to 3cm long and constituted of 5 lobes. Alchemilla diademata blooms from May to July and produces small egg-shape flowers.

Dr. Elie Barbour and Dr. Rabih Talhouk were both part of the research team who did a large screening of numerous indigenous plants of Lebanon that have commonly been used in folk-medicine, according to their antimicrobial activity. The water and methanol extract of 27 different species were tested in-vitro in AUB Nature Conservation Center laboratories against 9 microorganisms. This work led to a 2004 paper that explained how the water extract derived from whole plant of Alchemilla diademata was the only water extract that showed an antimicrobial activity against the tenacious and widely spread bacterium Staphylococcus aureus. "It is the dream of any researcher to possess an efficient bioactive water extract because it is safe and not toxic, unlike methanol, so it can be directly used on the body", Dr. Barbour explains.

However, several issues have still to be solved. The access to the plant is difficult because it grows only at the age of snow and Dr. Talhouk failed to cultivate it. The antimicrobial was effective in-vitro but would fail in-vivo. Staphylococcus aureus provokes the coagulation of the surrounding blood that protect it from the immune system and any medicine, as it was shown during the research on Origanum ehrenbergii.

"We obtained very exciting results but we just opened the road for more advanced work. We need the plant to be more available for further experiments, so we have to find a successful way to cultivate Origanum ehrenbergii ", Dr. Elie Barbour concludes.