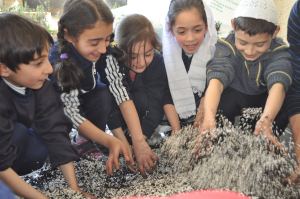 Batloun is located in Mount Lebanon, 8 kilometers away from Caza Center in Baakleen. It is bordered by the town of Kfar Nabrakh on the west, Jisr el Misri on the east, Maasser El Chouf on the south, and Briih from the north. Its altitude is 1,250 m above sea level.

Batloun village has an active municipality formed of 12 council members and the Mukhtar. The municipality is divided into several committees of which are: Works, Educational, Cultural, and Delivery committees. The village has “Batloun Cultural Club” that host several cultural and communities’ sponsoring events. Batloun village has one public school only and two vocational institutions. Private schools and Higher education are not available in the village. The illiteracy rate is estimated at 1 percent. Batloun infrastructure is relatively good. Electricity is provided but is being restricted to a certain number of hours per week. The telephone system is good in the village. The sewage disposal system is of minimum standards. Drinking water is provided from Barouk springs. Consumption water is provided from water tanks and artesian wells distributed to the houses. Batloun is also rich in groundwater and has a river flowing in the village. The inhabitants of Batloun have, in general, low income. Their main sources of income come from agriculture, governmental jobs, local trade and small industries (i.e., aluminum manufacturing and metal welding) covering village local demand. The most widespread agriculture is vegetables and fruits. Some are consumed within the village and some are sold in the market especially in Saida's market .The fruit trees cultivated in this village are apple, peach, cherry, and fig, almonds as well as grapes trees. Raising cattle is no longer a way of living in Batloun where animals are raised only to cover the households needs of dairy products and meat. Oak tree is one of the most common wild trees in Batloun; especially the Valonion oak and another wild deciduous tree is the Lombardy poplar.